War on the Basis of Principles 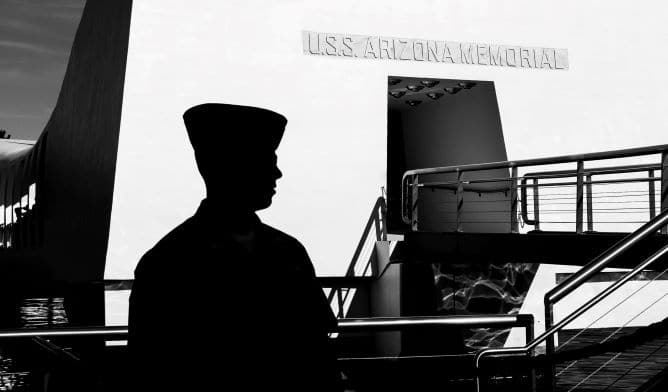 07 Dec War on the Basis of Principles

Posted at 05:30h in Issues, National Defense by Admin 1 Comment

America declared war on Japan after the attack on Pearl Harbor 80 years ago this week. Immediately, Germany and Italy declared war on the United States, which reciprocated two days later. That is how we entered World War II.

Technically, these were the last times America “declared war” on another nation, although, of course, numerous wars have followed with authorization and funding provided by Congress. Over the past eight decades, Korea, Lebanon, Vietnam, Bosnia, Iraq (twice), Afghanistan, and other places have seen our troops deploy, fight, and often die.

These are things to contemplate as we look back on Pearl Harbor and the just war that followed.

How Wars Start, Go, and Stop

There is an old saying, “Those who do not learn history are doomed to repeat it.” Because America has suffered through many wars already, it might be wise to review very briefly the basics of how some of those conflicts began, proceeded, and ended. We can learn from history.

Going back 160 years, the Civil War began when confederate troops attacked Fort Sumpter as part of a conflict about slavery and preserving the union. Secession, four years, and approximately 620,000 military deaths later, armies from the South began to surrender, but it took more than another year before all of the fighting stopped. It is an open question when, if ever, the underlying conflict about racial equality stopped.

World War I—the “war to end all wars”—started after Archduke Franz Ferdinand of Austria was shot, but the United States stayed neutral for years until German U-boats sank passenger ships (most notably the Lusitania) with Americans on board and later Germany reached out to Mexico about an alliance against the United States. More than 116,000 American soldiers died in the two years of U.S. participation in that war, which formally ended with the Treaty of Versailles.

The bombing of Pearl Harbor and the events that followed led to 405,000 U.S. military deaths in four years.* World War II did not stop until after America and its allies killed hundreds of thousands of civilians in bombings that included the first use of atomic weapons.

*Estimates are that 15 million soldiers from other countries died in the Second World War, as did approximately 45 million civilians—possibly many more.

The Korean and Vietnam Wars started with invasions by communist-backed forces from the north, with the United States entering to support democracies. Some 36,000 Americans died in Korea over three years, and nearly 60,000 died during more than a decade of fighting in Vietnam. Neither war concluded cleanly or decisively, and Communism was not defeated in either.

There is not enough space here to explain what led to or resulted from the Persian Gulf War against Iraq in 1991, the Second Iraq War in 2003, or the so-called “War on terror” in Afghanistan from 2001 to this year. Suffice it to say that many thousands of Americans died or were wounded, trillions of dollars were spent, the results were mixed at best, and the “endings” all had a lot of hair on them. The decisions to enter those wars have been much debated by all and regretted by many.

The point of this history recap is that it is one thing—generally a popular thing—to react with passion and aggression when the United States and our way of life is threatened. But it is another thing to maintain that same fervor and will when our soldiers are dying in foreign lands. It is yet a third thing to find an agreeable time, place, and terms to wrap up those wars. Moreover, it is not clear there even is such a thing as “winning” wars today. At least the wars we have started or entered in the last 75 years have not led to conclusive victories.

Instead of passions and fear leading to war, our politicians must be sure that key American principles make war an absolute necessity before we send troops into combat or drop bombs. Defending principles of law and justice, freedom, equality, and protecting the vulnerable all should be prerequisites to any declared or undeclared warfare. We also must have clearly defined, attainable goals for advancing these principles when we commence or join any military conflict.

And we must plan in advance how and when we will exit when our principles have been defended and our objectives have been met. The old, passionate rallying cry of “Remember the Alamo” must now be replaced by the refrain of “Remember Afghanistan, or We Will be Doomed to Repeat It.”

If Roe v. Wade is Overturned