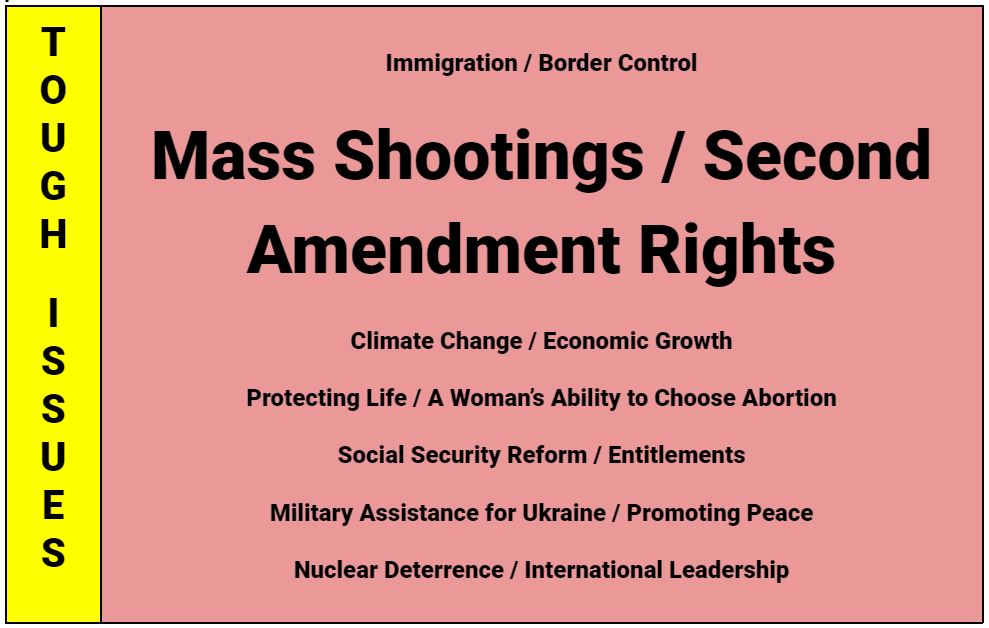 This is the first of seven posts focusing on what Principle Based Politics views as the most difficult-to-resolve political issues facing our nation today. Unless something different jumps to the forefront before our series ends this spring, the other six issues, in addition to mass shootings/Second Amendment rights, will be as follows:

You will notice that each “issue” is listed with two facets. That is because these topics all involve complexities that defy short nomenclature and easy definition. They indeed are tough issues not fit for universal agreement, simplistic answers, or political sound bites.

Despite the complexities, the degree of difficulty, and the admitted non-sexiness of substantive political analysis, we will do our best to make each of these seven posts brief and perhaps also easy, enjoyable, and enlightening to read. As to each issue, we will suggest a bipartisan solution.

Now it is Los Angeles, where 11 were killed and 9 wounded in a ballroom in which they gathered Saturday night to celebrate and dance.

We also near the unhappy anniversary of a shooter attacking a high school in Parkland, Florida, and killing 17, some five years ago next month. Just last May, it was Uvalde, Texas, where 21 were gunned down at an elementary school. In Colorado, 13 were murdered in 1999 at Columbine High. Another 61 at a concert in Las Vegas were sniped from a hotel window in 2017, the same year 27 were shot at a church in Sutherland Springs, Texas. Twenty-six were massacred at Sandy Hook Elementary in Newtown, Massachusetts in 2012. And 50 were slain in 2016 at a night club in Orlando.

There have been many, many, many other mass shootings.

What the issue is: Would America benefit from federal gun control, and, if so, what provisions would be most helpful and also constitutional?

Why this issue is difficult: No law would work perfectly to solve this problem. Opponents of gun control point out that there already are federal, state, and local gun laws, none of which have put an end to mass shootings, let alone all gun deaths. Criminals, including evil shooters, by definition do not follow laws; they steal guns, assemble illegal ghost guns, or obtain guns improperly through straw buyers and unlicensed sellers. Therefore, proposed laws mostly would affect law-abiding citizens, and gun laws will not get at the root causes of the problem—mental illness, societal and institutional breakdown, and the devaluation of life.

Opponents also have asserted—successfully—that the Second Amendment of the U.S. Constitution absolutely protects the right to own and carry guns, and tens of millions of Americans enjoy exercising that right for sport or personal protection. Gun makers and sellers have significant amounts of political clout. The non-gun-control ideas they promote (such as “hardening” schools and improving mental health) are repeated often in political arguments, and those points all have a certain appeal.

Where the issue stands today: Federally licensed dealers legally can sell a wide array of guns and ammunition to buyers who are at least 18 years old and pass background checks. This includes military-style automatic rifles that can fire multiple bullets with a single squeeze of the trigger. In addition, weapons are widely available through illegal channels and through private, unlicensed sales.

Politicians hesitate to pass stricter laws, for the reasons described above.

To resolve entrenched problems, we need first to recognize consensus where it exists. For legal obstacles, we must find constitutional solutions that are principled and helpful.

Solutions: There are several things on which we think the vast majority of Americans (i.e., those who do not sell guns for a living and have no intention of shooting anyone) would agree: (1) there should be significant restrictions on who can buy and own guns, and any restrictions would be effective only if done at the national level; (2) licensing of sellers and registration of ownership in a comprehensive federal database will keep some guns out of the wrong hands; (3) presale background checks, waiting periods, and higher age restrictions, along with removal of guns from those who commit a felony or are mentally ill, all would be helpful; and (4) the military and police may need automatic and semi-automatic weapons, but the rest of us do not.

We understand that opponents of additional gun laws and some proponents of shooting fear that allowing any new control will produce even stricter restrictions and eventually will lead to “taking away our guns.” But, so too, might disallowing new gun control produce more guns in America and make it easier for bad people to murder the innocent. Both are “slippery slope” arguments with weight.

Something does have to give. Based on our often-expressed principles, this blog thinks the optimal path forward politically is found in the four areas of consensus enumerated above, none of which infringes on Second Amendment rights. True, a new law based on these fundamental points would not be perfect and would not totally eliminate all problems. Some Members of Congress even may be ousted if they vote for such a bill. That is too bad, in every sense of the phrase.

Nevertheless, there is no perfect solution to mass shootings or gun violence generally, so we must look only for options that will bring progress. To paraphrase, perfect can be the enemy of better. We are looking for anything that will improve the current situation.

America is tired of virtue signaling, empty thoughts and prayers, and copy and paste condolences. America also is tired of politicians spouting off and making angry political noise about shootings and gun control. We need to try something real and meaningful. Because what Americans find most tiring are mass shootings and gun deaths.