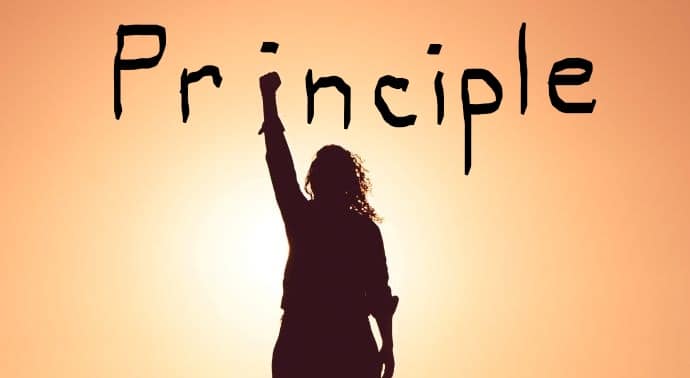 Revolutions have been important in the United States, a country whose very existence is owed to the American Revolution. Our nation also played a major part in the Industrial Revolution, Digital Revolution, and others.

The word revolution comes from the Latin revolutio, which means “a turn around.” Political revolutions occur when the population revolts against the government, such as in the French Revolution and the Russian Bolshevik Revolution led by Lenin.

Speaking of whom (wink), the Beatles in 1968 released their own Revolution song, which, after an amazing guitar introduction, began with these lyrics:

You say you want a revolution

We all want to change the world

This manifesto of sorts summarizes how Principle Based Politics wants to change the world through a thoughtful, peaceful, principles-based revolution.

Simply put, we want to see the best principles become the deciding force in American politics. That would mean our federal leaders focusing on the real issues America faces,* and then applying principles to help our people deal with those issues. Making decisions and taking action based on the right principles, to benefit all Americans—that is the idea.

*Things that actually are not issues on which federal politicians should focus include: what Donald Trump says, thinks, or does; whether Joe Biden should run again; which party should control Congress; how to get reelected; state and local mandates; local crime and policing; local schools; how the Supreme Court should rule in any particular case; and many others. These points either should not be political issues at all, or they are for others besides our elected federal officials to control.

What are the real national issues in 2022? This chart lays out those issues and applies our principles in the most direct way possible.

(1) How much money the federal government should budget for the military, climate change, and social programs

Freedom, protecting the vulnerable, respect, peace, equality, and limited government are principles that should combine to limit our budget to what is necessary to uphold American values while doing only what the federal government must do (as opposed to what states, other entities, and individuals can do).

Research and funding regarding preventative measures now and for diseases to come is supported by principles of protecting the vulnerable and ensuring the future; but freedom, free enterprise, and limited government leave most decisions to states, municipalities, or individuals.

Limited government and free enterprise principles favor the government withstanding the temptation to overstimulate the economy and over-entitle our people through unnecessary spending.

Principles of freedom, free enterprise, dignity, and protecting the vulnerable support welcoming people who want to come here to work.

(5) U.S. international policy as to Russia, China, etc.; our role in world security and freedom

Principles such as respect, protecting the vulnerable, peace, understanding, ensuring the future, and freedom itself support a united America engaged abroad and with strong alliances.

Law and justice, as well as equality, require justices and judges to be selected on the basis of competence, not political factors.

Limited government, freedom, equality, transparency, free enterprise, and protecting the vulnerable (including generations to come) are principles that weigh in favor of reducing the national debt while keeping tax burdens down.

This is where our principles of honesty, transparency, integrity, dignity, service, and respect are essential to preserving democracy.

Bring Back the Beatles’ Optimism

We would like to be as optimistic as John, Paul, George, and Ringo were in concluding their Revolution song with the refrain, “Don’t you know it’s gonna be…all right…” But today, admittedly, the idea of principled American politics can indeed seem a bit more remote than that. Perhaps this is where a quotation we saw recently can produce more hope:

Please join the revolution. Make it inevitable. Spread the word. Share this on social media. Elect politicians who focus on the real issues.