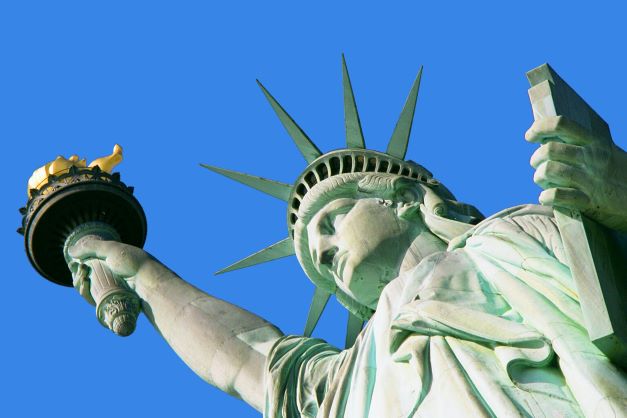 Posted at 05:47h in Immigration, Issues by Admin 0 Comments

Rising to more than 300 feet above the waters of New York Harbor stands the Statute of Liberty. In her right hand is a torch, and the left holds a tablet bearing (in roman numerals) the date July 4, 1776, the original Independence Day. On the base of the statue, these poetic lines are inscribed:

“Give me your tired, your poor,

The wretched refuse of your teeming shore.”

For the last 135 years, the Statue of Liberty has been a symbol welcoming those who come to live in America.

The Declaration of Independence itself, in a little-known passage, also expressed America’s openness to newcomers from abroad. Specifically, in its list of the complaints provoking the colonials’ decision to break away, was that the King of England had “endeavored to prevent the population of these States; for that purpose obstructing the Laws for Naturalization of Foreigners.” Our founders clearly wanted people from other countries to be allowed to move to America and become citizens in the new land.

Somewhere along the way, America has become less welcoming. This post will analyze how Principle Based Politics would apply our principles to the issues related to immigration today.

Needless to say, immigration has become a major political issue, not just in the United States, but in developed countries around the world. Subsidiary issues abound: U.S. border policy for detained children and families, refugee resettlement, permanent residency visas, “Dreamers”/DACA, and the building of a wall, to name a few of the points of contention in America alone.

Despite the extraordinary level of attention paid to immigration, it is relatively easy to identify the basic issue and the principles involved. The central question is whether the United States of America should be less open or more open to newcomers from other countries. In historical terms, do we still want “the population of these States” to be increased by “the huddled masses” elsewhere? Once that pivotal question is answered, all of the subsidiary topics fall into place.

Of the principles advanced by Principle Based Politics, those that apply to the cardinal issue of the immigration debate begin with the government principle of freedom and free enterprise. Protecting the vulnerable is another vital principle for governments to apply, particularly to the related issues involving refugees and children. The leadership principle of dignity also comes into play, in that political leaders who recognize the human dignity of all people are likely to be influenced by that principle in making immigration policies.

The impact of these principles, therefore, conceptually supports openness. Undoubtedly, any immigration system is going to result in some individuals coming to America who we will wish had stayed where they were. There will be crimes committed, public resources used, and transitional services needed. These factors, however, cannot be the reason to close our doors. After all, the same difficulties always have been true in America, including when the country admitted immigrants from Scandinavia, Germany, Cuba, Poland, Japan, Ireland, China, Italy, and many other places. We have broadened, strengthened, and ultimately thrived in large part because our country has allowed immigration.

Instead of more restrictions, we should want it to be faster and simpler to become an American citizen. We can start by opening more pathways to legal entry and citizenship. To do that, we must speed up and expand the asylum system, which currently has a backlog of around 1.3 million cases. We also should ease and enlarge legal immigration visa programs (e.g., H-1B and green cards), which help the American people and companies who want to sponsor family members and workers to come here.

Immigration and naturalization have made America what it is today. Viewing the current controversies through the lens of principles makes it clear that this should continue for the good of all concerned.

The issue of immigration is personal for many of us. Not to put too fine of a point on it, but many life-long American citizens would not be here today without the country’s once-open policies.

For your blogger, one grandfather came to America, all by himself, from England. Not long after he had passed under the Statute of Liberty, made his way through Ellis Island, and ridden a train to the Midwest, he enlisted in the United States Army, to fight in World War I. The other grandfather’s parents left Germany with eight children, lost one on the boat, and then later added Grandpa, who was born in a barn while they were building a small farm house in America. The Great Depression and world wars eventually were survived, as did sons who went off to fight against the ancestral homeland. Both grandmothers had similar stories.

With this heritage, it is logically consistent to believe in the five-step model of immigration, assimilation, naturalization, loyal citizenship, and national service. America needs more, not less, of all of those today. None are possible without the first step.

Does the Declaration of Independence Remain Relevant?