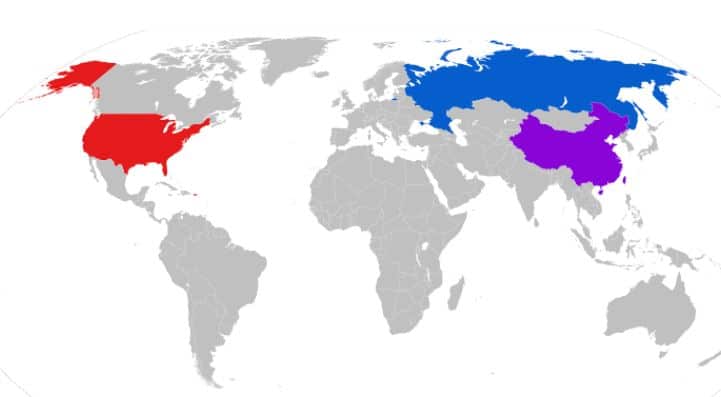 Do look now: While polarized Americans and government officials fight among themselves, China and Russia are trying to influence the world.

Both are trying to restore empires lost to Japan (in the case of China) and the west (as to both Russia and China). Both sense internal weakness in the United States, and they are testing that perceived weakness through aggressive actions toward their neighbors, who happen to be our friends. Pushing further, they lob threats from a distance into America through cyber mischief and political meddling. They challenge us by flouting human rights and supporting bad actors like North Korea and Syria.

Make no mistake, these are merciless, authoritarian regimes, not “just” communist countries and enemies of democracy. Yes, they practice totalitarianism against their own people, but they also want to exert world power—or at least control over large regions.

Meanwhile, Americans dispute whether an election was properly won or not (it was), whether our citizens truly have a right to vote (we already do), and more than anything else, which political party has ruined the country (neither, yet). Please do look now, and see why we need to pull ourselves together internally.

We all know that China is the most populous nation on earth, with 1.4 billion people—four times as many as the United States. For its part, Russia has nearly twice as much land as America and spans 11 time zones, closely neighboring both our 49th state (Alaska, from which Sarah Palin supposedly could see it) to the west and Europe to the east. These are big and foreboding countries.

Let us take just a moment to summarize the problems we face with each.

Russia. Sensing American weakness, Russia attempts to portray international strength. It involuntarily annexes part of Ukraine known as Crimea, and it positions its army at Ukraine’s borders. It jumps in to provoke and stoke fights in the Middle East, particularly for its client, Syria. It seeks out the role of power broker.*

*These moves did not start when the Biden administration entered the White House. Russia was employing similar strongarm tactics while Presidents Trump and Obama were in office, as well.

Clearly, Putin’s Russia takes on his persona of a tough, cunning aggressor. One with nuclear arms and vast resources of oil and gas.

The fact that Russia shares borders with Europe creates a major dilemma for all of the West, including America. Russian fuel heats Europe. Russian military weapons are pointed at Europe. As a result, a unified West cannot simply sanction Russia to its knees by refusing to do business with it. America also cannot instigate a war against Russia in Ukraine or anywhere else without severe consequences and risks.

China. In a quieter, more passive-appearing way, China is every bit as aggressive as Russia. It continues to take the position that the island nation of Taiwan is part of China. It bullies Hong Kong and ethnic minorities. It provokes naval skirmishes in the South China Sea.

The dilemma unique to China, however, is its economic might. Chinese businesses supply essential parts to American companies and to those worldwide. China’s huge population provides an attractive market also for companies looking to generate revenue from abroad. Chinese investment supports governments and businesses.

All of this entanglement—even interdependence—makes it nearly impossible to use economic force to make China behave. Use of military power against a nation the size and strength of China (which has 350 nuclear warheads) seems like an even less attractive option.

Diplomacy, not economic or military might, is what America and the West need to exercise on both China and Russia. And diplomacy takes time, intelligence, savvy, and focus. It must be our priority.

This is where American unity is essential. It often is said that a house divided against itself cannot stand, in unity there is strength, hang together or get hung together, and so forth. These sayings are true. Diplomacy requires peace and harmony within our borders as well as with other nations.

Seriously, folks, do we really want to see any President of the United States make catastrophic mistakes in dealing with Russia or China just so we can say “I told you he never should have been elected”? Just to help our favorite political party win future elections? At the very least, party politics has to stop at the nation’s borders.

The call to action for all of us goes even further. When we attack and disbelieve virtually everything our president says and does, it decreases American respect from abroad. Claiming that elections were stolen, or claiming foreign interference led to a wrong election result—whether these claims relate to Clinton, Biden, or Trump—do not serve our nation’s interests. Claiming that “he is not MY president” undermines American diplomacy.

Internal dissension simply strengthens Russia and China’s argument to their own people and to the world that democracy does not work and does not produce good leadership. That the Chinarussian ways are superior. We must demand that elected federal officials start focusing on undivided American diplomacy.

Do “We Need Term Limits”?

Say It Ain’t So, Joe