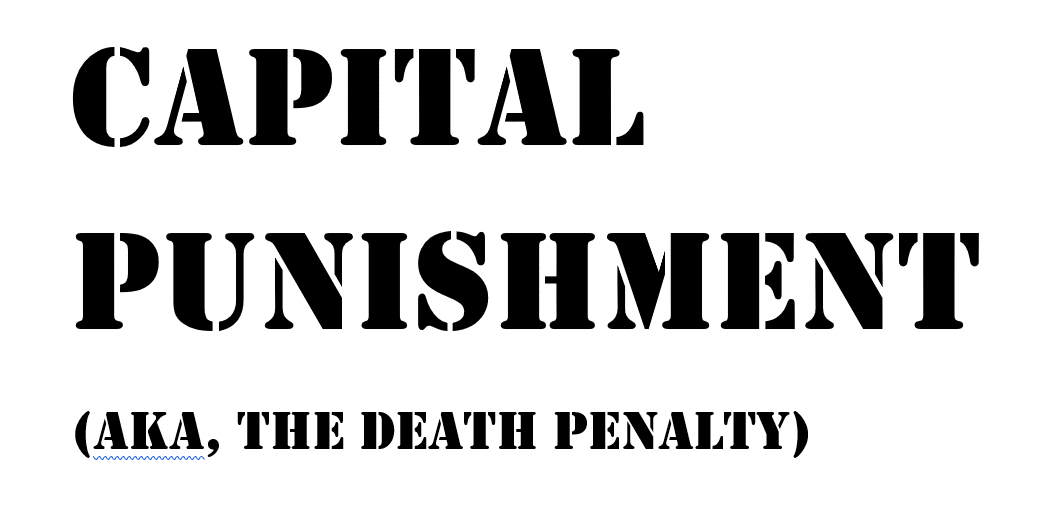 Have you ever seen an electric chair in person? Or stood by a gallows? Have you been inside a gas chamber? Did you ever put your finger into holes in the wall behind where a person faced a firing squad? Your blogger is not terribly displeased to answer in the negative to each of these questions.

But he has seen a guillotine. It was in the euphemistically named “Hanoi Hilton,” the notorious prison where John McCain and other American soldiers were kept during the Vietnam War, the remnants of which are a museum today. There stands on display the infamous “apparatus designed for efficiently carrying out executions by beheading,” according to one appropriately blunt and forceful definition. Standing more than ten feet high, its heavy blade at the top, the guillotine is a startling sight indeed.

Seeing the guillotine alone is enough to get one thinking about capital punishment and whether the practice has a place in our country. Applying principles to that issue provides an answer to the question.

A Principled Analysis of the Death Penalty

Many countries have formally abolished capital punishment, or they have simply stopped doing it. The United States still does carry out death sentences for some federal crimes, and some individual states do the same under their own penal codes. In the past year, however, our federal government executed more people than did all 50 states combined. A political issue for the United States, therefore, is whether the federal government should continue imposing the death penalty.

Government principles we see as applying to this issue are protecting the vulnerable, equality, and, of course, the twin cornerstones of law and justice. In addition, respect and dignity, which we have identified as leadership principles, also come into play. Of these, the principle of law and justice applies most directly, as explained below.

Protecting the vulnerable seems to cut both ways, with crime victims (and their families), potential victims, and convicted criminals all vulnerable to some extent. Executing even a murderer does not “protect” the victim or anyone else much more than a life sentence would, though, and there is little evidence that murderers and rapists are deterred from committing the crime by the prospect of being lethally injected down the road. On the other hand, abolishing capital punishment does provide some protection for the relatively few who may be wrongly convicted. The principle of equality also applies only in a subset of cases, such as when a death sentence results from racial prejudice or another improper bias, or when a poor defendant cannot afford as helpful of a lawyer as a rich one could.

The leadership principles of respect and dignity, as we see them, are opposite sides of the same coin. Dignity demands that all persons—including convicted criminals—be treated as human beings created in the image of God. Respect, in contrast, is conceptually inbound, focusing on how our government officials can bring respect to the United States from inside and outside our borders; it is doubtful capital punishment does so.

The principle of law and justice is most directly on point. In particular, when thinking about capital punishment, the right to due process of law leaps out of the dusty parchment of our Constitution: “No person shall . . . be deprived of life, liberty, or property, without due process of law.” If depriving a person of property, such as money or another asset, cannot be done without an adequate process of law, image the level of process that must be due before a person’s liberty can be taken by putting them in prison, even for a day. And then, go a hundred steps further to understand how substantial the process would need to be before a person could be sentenced to death and then executed. Our judicial system—our country—owes that person an enormous quantity and quality of process before true justice can be realized.

Herein lies one major problem with the death penalty in our evaluation of the applicable principles, most profoundly the principle of law and justice. We simply do not see how any system of justice, any amount of legal process, can ensure that no innocent people will be executed unfairly or even by mistake.* To us, there is not enough legal process in the world to provide what is due to someone charged with a capital offense.

*Perhaps we are influenced by our view that human life is of inestimable value. In this respect, at the very least, we do think you will find our policy positions on other issues to be consistent with our conclusion on the capital punishment issue discussed here.

Other concerns are raised by the principles of respect and dignity. Putting a person to death is not a display of dignity in any fashion, and it also is unlikely to bring the United States any kind of respect we would want to have. Looking at the countries that practice capital punishment confirms this, as the top of the list includes China, Iran, Saudi Arabia, Vietnam, Iraq, and Egypt, along with the United States. North Korea’s current practice is unknown, but it is reported to have carried out public executions as recently as 2014.

After reviewing all of the applicable principles, particularly law and justice, given the unlikelihood that the death penalty can be imposed fairly or in a way that will deter crime, the federal government of the United States should discontinue its practice of capital punishment.

Vengeance is Not a Helpful Principle

Over the years, capital punishment has been supported by two main arguments. The first is the public safety-based deterrence point alluded to above in noting that we are not convinced that retention of the death penalty protects the public or deters violent crime in any meaningful sense. A second argument is that crime victims and society at large deserve retribution when one of us has been murdered or otherwise victimized. This is said to be “just.” We will conclude with a very brief look at that assertion.

This retribution-equals-justice theory takes us back to where we started our essay—the guillotine in Hanoi. The museum housing it pointed out that the revolutionaries in Vietnam enjoyed the irony of using the instrument of death on the French “colonial oppressors” who had punished the locals with it for years. The success of the revolution allowed the people to exact revenge for past misdeeds. Call this revenge, retaliation, reprisal, or the nicer sounding retribution, it is a form of payback.

To Principle Based Politics, this comes across as two wrongs not making a right. Whether it is retaliatory killings among the Shias and Sunnis or one gang against another, forceful reprisals found in beanball wars on the baseball diamond or in hockey fights, or even political payback by one party against another, we do not like it. So, too, the death penalty. Wielding capital punishment to obtain vengeance against a wrongdoer does not bring back or help the victim and, in the long run, it is unlikely to ease the pain in a family or society. No level of punishment can do that. It is a second wrong, compounding a wrong already done.

The Problem of Political Partisanship, Tribalism, and Extremism