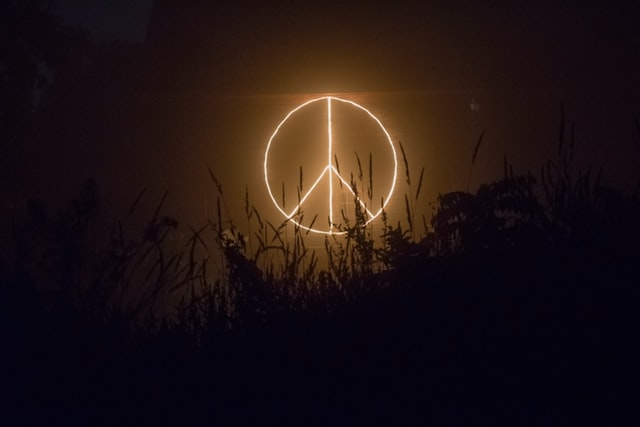 Posted at 05:18h in Uncategorized by Admin 0 Comments

Retiring at a relatively early age has provided your blogger more time to read books, and there are a lot of good ones out there. One well-developed genre particularly enjoyed is books set during World War II. Authors have been prolific and excellent in writing both fiction and nonfiction books about The War, and you no doubt have read such books.

This reading does make one wonder, however, why are there so many great books about war, and so few about peace? Even the most famous (and longest) of the latter is War and Peace, for crying out loud.

Give peace a chance, we say.  It is our fourth principle for federal leadership.

“Peace is Not the Absence of War”

If war is hell, then peace must be good, right? But peace, to us and even to famous commentators from the past, takes on a much greater meaning than that there is no war declared at the moment.

This blog is about politics, specifically federal politics, so let us address federal politics as our example. Peace in this context runs the entire gamut from avoiding conflicts between nations to avoiding tribal warfare between our two main political parties. None of the clashes on that spectrum are helpful to our citizens. Peace is better for our nation—and, more importantly, for the people in our nation—in every scenario, albeit international, interdepartmental, interstate, and internal at the White House.

Internecine is an ominous word that gets at why peace is valuable. An internecine conflict is one in which both sides suffer—a definition that would seem to apply to nearly every conflict to some extent. Internal conflicts can be some of the most mutually harmful of all. Think the Civil War. Peace, on the other hand, is a contrary status in which both sides benefit. Think…think…think…therein lies the problem: while we think of America as a peace-loving nation, there simply are not enough examples of true, comprehensive peace in our land.

“Domestic tranquility,” nonetheless, is a constitutional mandate, of sorts. It certainly is a foundational principle of our very nation. The authors of the U.S. Constitution explained the purpose of that hallowed document itself:

“We the People of the United States, in Order to form a more perfect Union, establish Justice, insure domestic tranquility, provide for the common defense, promote the general Welfare, and secure the Blessings of Liberty to ourselves and our Posterity, do ordain and establish this Constitution for the United States of America.”  (Emphasis added.)

Our nation has not fought any major international wars for several years. We ostensibly are “at peace” today. But we can do better.

If peace is a fruit of the spirit, which the Bible says it is in Galatians 5:22, then our domestically-grown peaches are tasting dangerously bitter these days.

Principle Based Politics believes it is imperative for the United States to seek out leaders who understand that the country as a whole will benefit in peaceful times. Rather than using conflict strategically to further their own personal agendas, these leaders will strive for tranquility not only abroad, but at home, as well. These leaders believe this, or say they do, but they also demonstrate it.

Peace-honoring leaders can be recognized by the signals they send. First, their political positions on foreign-policy issues, racial justice, and guns do not pander to the militaristic and the hate-filled among us. They don’t silently whistle to dogs. But just as much, none of their positions are designed to provoke fights or create enemies at home or abroad. They are not angry, and they do not look to ride a wave of populist rage to attain or retain public office. They do not look to deepen division even when their strategists and pollsters tell them that the politician may benefit personally from driving wedges. They avoid flames whenever pouring gas.

Though it may seem illogical, however, another indication of peace-principled leaders is that they are strong and they believe the United States should be strong. Strength brings peace. This is the proverbial “speak softly and carry a big stick” approach often attributed to Theodore Roosevelt. This actually means non-aggression with the ability to be forceful if necessary. And there are just wars. Clearly, this approach requires a strong military, a strong economy, and a strong, unified nation.

A strong nation also needs a strong, bottom-up, democratic government. Politicians whose words and deeds show they will honor and build up our democracy in every way will promote the cause of peace, everywhere.