A Son’s Laptop, A Wife’s Texts 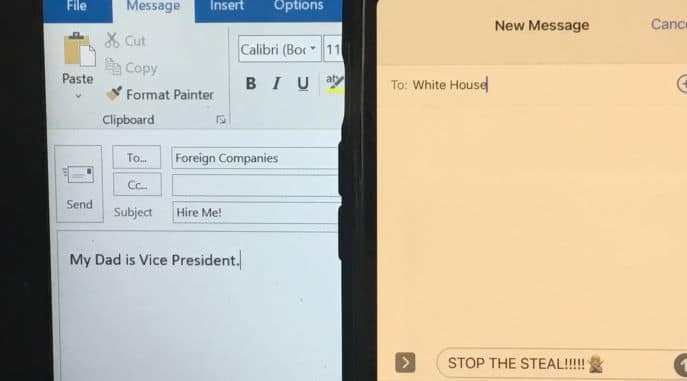 Posted at 05:39h in Uncategorized by Admin 0 Comments

President Biden and Justice Thomas’s political enemies have used every type of communication device available to them to publicize the output of Hunter’s laptop and Ginni’s phone, in order to undermine the father and husband, respectively.

The first question is who has embarrassed whom in the process. More relevant to this blog is the question of the principled way to view conduct of a federal leader’s spouse or adult child.

Right up front, we want to state that Hunter Biden’s emails and Ginni Thomas’s texts indeed are embarrassing, and they do raise legitimate concerns. Both individuals have flaws and have committed actions that put themselves and others in an unfavorable light.

Hunter, now 52, appears to have tried to make money from foreign clients based on his father’s status as vice president. Nevertheless, when the New York Post reported that it had obtained the contents of the laptop—and thus the dubious emails—just prior to the Trump-Biden election, most media sources refused to cover the story.*

*Those media outlets were concerned that the Post’s article may have been based on misinformation timely planted by Joe Biden’s political enemies, concocted by Russians, or otherwise false. Months later, however, the laptop’s contents were verified as authentic.

Ginni is a long-time political activist, including as to issues that ultimately have made their way to the Supreme Court, on which her husband has served since 1991. One notable example is that Ginni Thomas attended part of the “Stop the Steal” rally on January 6, 2021. Relatedly, she also sent numerous text messages to Donald Trump’s top advisors supporting the notion that Joe Biden stole the 2020 election. Clarence Thomas later was the only justice who voted against a Supreme Court decision allowing investigators access to White House records related to the January 6 riot at the Capitol, which included Ginni’s own texts.

Both of these scenarios are unseemly, without question.

Republicans, Trumpians, and other opponents have attempted to smear Joe Biden with his son’s misdeeds. They insinuate that the father condoned or even encouraged the son’s alleged influence peddling. Meanwhile, Democrats, Progressives, and others have attempted to oust Clarence Thomas from any role in Supreme Court decisions on select or all future cases. Some have called for his resignation, impeachment, or at least recusal, based on his wife’s activism and his decision to hear cases in which she had an interest.

What principles could help Americans and their politicians evaluate nasty bruhahas like these? Of those articulated by Principle Based Politics, the leadership principles of integrity, peace, respect, understanding, and honesty come most directly into play. Of the governing principles we promote, law and justice, along with transparency, are the two that predominate.

On this topic, integrity is the most applicable principle of all. Yes, to preserve our nation’s integrity, appropriate attention must be paid to our leaders’ conduct, and any evidence of the leader’s own lack of integrity should be investigated and brought to light promptly. The principle of transparency demands this, as well, and no one is above legal scrutiny or justice. But—and it is a big but—no federal leader should be besmirched automatically every time his or her relative has committed misconduct. Nobody is responsible for what a spouse or adult child says, writes, or does. This is an important distinction.

The concern here is that, in a big rush to take partisan advantage or get attention, politicians and media types are way too quick to cast aspersions, often in a hypocritical or disingenuous way. Such a rush to damn a federal leader itself generally lacks integrity. Hypocrisy is common. Reflexive damnation also violates the principles of peace and understanding, the latter of which demands that the facts be known before conclusions are drawn, aspersions cast, and even insinuations implied. Strident, judgmental behavior, in turn, reduces the respect America receives at home and abroad.

When relatives embarrass themselves, we all need to stop fishing for red herrings, misdirecting rage, tilting at windmills, gilding lilies, and overplaying hands. To engage in political bashing of this sort should embarrass the accuser as much as the accused.